A Reader Profile Reunion: Where Are They Now? 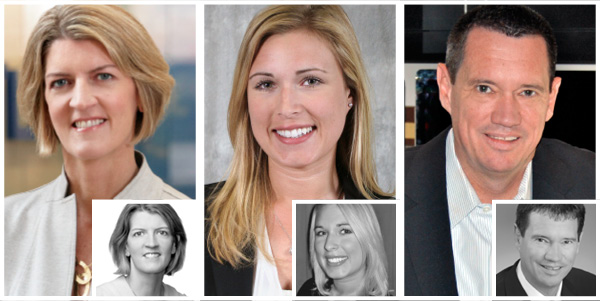 Inbound Logistics gets back in touch with former Reader Profile subjects who have since moved on to new challenges. All of them are most likely to succeed.

Beth Ford: From Flavors and Fragrances to Feed, Seed, and Butter

Back in 2009, Beth Ford was busy at International Flavors and Fragrances (IFF), re-engineering its global supply chain to help the company continue to grow as efficiently and effectively as possible. During Ford's years at IFF, the company consolidated its European operations into an expanded facility in Amsterdam, established new operations in China and Singapore, enlarged a facility in India, and made plans to do the same for a manufacturing plant in Istanbul.

"I'm proud of that time because the support we received from the business and the board for major investments positioned IFF for 15 more years of efficient, global growth," says Ford.

Enhancing infrastructure is also a top priority for Ford in her latest position as executive vice president, chief supply chain officer and chief operations officer at Land O'Lakes. The second-largest agricultural cooperative in the United States, Land O'Lakes is well-known for its dairy products, but the Fortune 500 firm is also a leading producer of animal feed, seed, and crop protection products.

Ford is responsible for every aspect of the Land O'Lakes supply chain. When she joined the company in January 2012, one of her first projects was examining the company's global facilities to see how well that network matched Land O'Lakes' plans for the future. Her team evaluated whether the infrastructure was in shape to capture growth effectively, and how well capital strategy and growth strategy were aligned.

Although the feed, seed, and crop protection businesses account for two-thirds of Land O'Lakes' revenues, the dairy business grabbed much of Ford's attention throughout 2012. The first challenge arose when early 2012 turned into a boom production period for dairy, and the U.S. co-op members' cows were giving all the milk that Land O'Lakes could handle.

Land O'Lakes had to deal with this excess creatively. "Unlike other businesses, I couldn't cancel or refuse delivery of inbound supplies," Ford says. That wouldn't have met the needs of co-op members who needed to sell their product.

Later in 2012, the worst drought in 25 years hit much of the United States, destroying crops and pushing up the price of feed for dairy farms. "We then had the opposite situation, where milk production was much lower," Ford says.

Land O'Lakes prepares for such market swings by coordinating the work of its procurement, merchandising, risk management, and other teams to reduce financial risk. When milk production rises, the company might divert more of the supply to its cheese manufacturing facilities, converting the commodity to a product it can store for future use. Land O'Lakes also nurtures relationships with large customers, such as major chocolate manufacturers. "When we have a surplus, we may check with key partners about their capability to help take some of that volume," Ford says.

Ford finds both aspects of Land O'Lakes' business—dairy production and agricultural "inputs"—compelling. "The food production imperative fits right in the middle of geopolitical events around the world," she says. She enjoys her complex job and the values that permeate a company that has been owned by farmers since 1921.

"And, who would have guessed that I'd move from New York to Minnesota for better weather?" she adds.

Brent Shinall: He Knows the Drill

In 2013, Rowan plans to complement its fleet of 31 shallow-water rigs with four ultra-deepwater ships that will allow the company to drill into seabeds 12,000 feet underwater. "We'll have the most capable ships in the world," says Shinall. Those ships will add a new layer of complexity to Rowan's supply chain.

As vice president of supply chain management, Shinall is responsible for all the inventory on Rowan's drilling rigs and in its warehouses in Scotland, Malaysia, Indonesia, Norway, Egypt, Saudi Arabia, and Houston. "The inventory includes all consumables, chemicals, spare parts for all the equipment, and the equipment itself," he says.

Shinall's highest priority since joining Rowan has been to implement an inventory management system for the entire fleet, based on the SAP enterprise resource planning (ERP) platform. He expects to complete that effort in early 2013, but the new system is already making a big difference.

"Before we had an inventory system, the rigs would just buy, buy, buy," Shinall says. Rig managers did their best to determine what parts each facility needed, but didn't know in detail what they had in stock or where it was stored.

"Now we work with our maintenance and engineering departments to determine the critical spares each rig should hold, and we set minimum/maximum levels," Shinall says. When stock falls below the minimum, the system automatically sends a buyer a requisition.

Shinall has also spent time preparing the way for Rowan's newest facilities in Malaysia, Indonesia, Norway, and Egypt. "We try to buy everything we can locally, so we don't have to ship it," he says. "My group goes boots on the ground in the country, finds all our major suppliers, then builds the logistics network."

Rowan works with three freight forwarders to consolidate shipments from suppliers, then move that product to its warehouses. From the local facility, Rowan moves the goods to a dock near its drilling rig, then the client—the energy company—takes the shipment to the rig on one of its supply vessels.

Transporting supplies to the deepwater ships will be a tougher challenge, because such ships are deployed all over the world. "Usually it's near a country with insufficient infrastructure, such as Angola or another part of Africa," Shinall says. "Part of my job will be ensuring we set up the logistics and infrastructure to move goods from our suppliers to our warehouses and docks, then out to the vessels." The deepwater ships also have complex equipment—and much more of it—than the shallow-water rigs.

To prepare for deployment, Shinall and his team created a "virtual warehouse" about one hour from the site in South Korea where the ships are under construction. "We're going to mock up this warehouse as though it were a storeroom on the ship, with all the exact locations, labeling, and shelving," he says. "Then we're going to build our inventory as the ship is being built." At the same time, they'll move the corresponding data into the SAP system.

"When the ship is ready to go, we'll load all that inventory from the virtual warehouse onto the vessel," Shinall says. "From day one, the ship has the accurate inventory, and off it goes."

Bethany Adamonis: Planning the Next Step

After completing a co-op program at Unilever, Bethany Adamonis was finishing an undergraduate degree in supply chain management at Penn State when Inbound Logistics profiled her in late 2007. Unilever had offered her a full-time job as a supply chain planner after graduation. But the chance to work on a series of supply chain projects prompted Adamonis to instead accept a job at the Florham Park, N.J., office of German chemical company BASF.

"I thought it would be a better experience to work cross-functionally than in a dedicated supply chain role," she says.

Her first scheduled project at BASF sprang from the company's plan to acquire another chemical firm, Cognis Holding. But when the financial crash of late 2008 interrupted that deal, Adamonis found herself working as a planner after all.

The job involved managing BASF's supply chain of aroma chemicals, which were made in Germany, then shipped to the United States, Canada, and Mexico. Adamonis was responsible for forecasts, budgeting, and inventory levels, as well as working closely with key customers.

In 2010, Adamonis was assigned to a cross-functional project that involved moving all BASF locations globally onto a single version of SAP's enterprise resource planning (ERP) system.

When BASF finally bought Cognis in December 2010, Adamonis was tapped to help integrate that company into the larger organization and move it to BASF's SAP platform. "I managed the purchase-to-pay work stream for the integration effort," she says.

Cognis sold natural chemicals to many of the same large accounts that bought synthetic chemicals from BASF. After the purchase, when BASF started selling both kinds of product, Adamonis ensured key accounts in North America suffered no interruptions during the ERP integration. "I also made sure they understood the transition plan and legal entity changes," she says.

Finishing that work in 2011, Adamonis turned her attention to a Cognis manufacturing plant in Mexico. Her job was to help bring processes and business rules at that facility in line with BASF's standard practices for North America. "That involved everything from efficient order quantities to lead times to research and development," she says.

Currently, Adamonis is the global manager for a project involving key BASF accounts. "We are connecting both of our SAP systems globally, so all processes—from order placement to invoicing—will be seamless," she says. "We are wrapping up our implementation plan in North America, and in February 2013 I'll pick up the European implementation."

The years since college have introduced Adamonis to some unexpected challenges. For example, she finds meeting deadlines can be tough when many people are collectively responsible for a project's success. Another challenge is understanding the upstream and downstream impacts of decisions made within a project.

As if these issues weren't enough to keep Adamonis busy, she has also been earning an MBA in global business strategy and supply chain at Rutgers University. "I have no social life," she notes. "I'm looking forward to taking a deep breath and spending more time enjoying New York City."

She's also looking forward to her next move. She may take an opportunity to work for BASF in Germany, or pursue a new role at the company in procurement or the corporate supply chain organization.

"I'm at a crossroads, trying to choose my next step," she says.