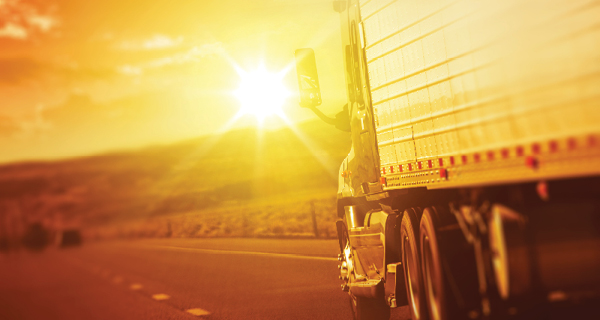 The trucking capacity crisis that plagued the industry for the past several years seems to finally have eased off—at least for now. Finding available capacity is still a problem that plagues some shippers, but the driver and capacity crunch is not as pronounced as it was even one year ago. In the wake of that crisis, government regulation and the economy now top the list of concerns for motor carriers trying to turn a profit following the Great Recession, which left many carriers lighter in both assets and capital.

The U.S. trucking industry has long been known as the barometer for the U.S. economy. Typically, respondents to the Inbound Logistics Trucking Perspectives survey overwhelmingly coincide in one direction or another about which way our economy is heading because they have their fingers directly on the pulse of American commerce. In 2016, however, the survey shows that most carriers agree that they have no idea what will happen next. Sixty-six percent of respondents say they don't see the economy trending up or down, but somewhere in between.

This uncertainty speaks volumes. Optimism has all but crashed in relation to previous years. In 2015, 53 percent of respondents thought the economy would trend upward, and in 2014 that number was even higher: 75 percent. This year, only 24 percent maintain a positive economic outlook.

Capacity will certainly tighten again in the future as regulations continue to give drivers fewer available hours on the road and sideline older equipment. Capacity issues will also push driver wages higher as truckers compete for drivers. In addition, a steady drop in oil prices has kept fuel rates down, making it difficult for trucking companies to rationalize substantial rate hikes.

Many shippers who had previously sought out intermodal options in the face of low capacity have been lured back to the highway by the return of affordable services. As such, shippers and logistics providers are again claiming much of the available capacity in advance of the next looming crisis.

That said, a greater number of available assets should stave off the crisis for a while longer. 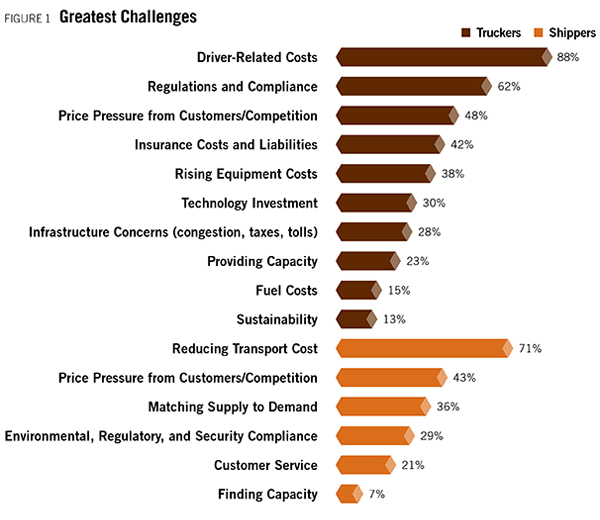 After the financial crisis began in 2008, trucking companies shed assets to cut business costs and stay afloat. Some carriers went asset-light, others merely streamlined their fleets or updated to more efficient equipment to get the most bang for their buck. Some private fleets disappeared altogether in favor of dedicated contract partners. Owner-operators and small carriers went out of business in disturbing numbers, and capacity plummeted. In 2016, however, a flurry of mergers and acquisitions to obtain assets continues to dominate the industry. It's becoming obvious that a trucking company without very many trucks can't compete in today's marketplace.

In 2014, carriers responding to IL's annual Trucking Perspectives survey reported an average fleet size of 3,268, and that number climbed slightly to 3,352 in 2015. But average fleet size skyrocketed to 4,426 in 2016, as companies continue to expand their fleets at unforeseen rates. 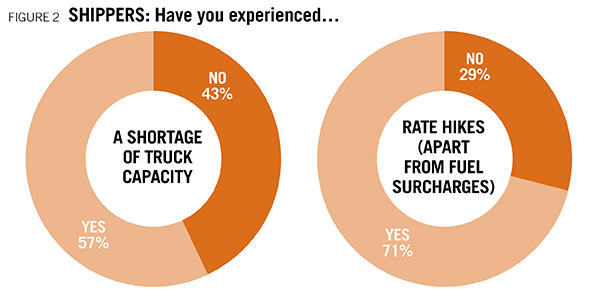 It doesn't matter how many trucks you have, however, if you don't have anyone to drive them. The baby boomer generation of truckers is nearing retirement, and there's currently nobody to replace them behind the wheel. The 2016 IL research supports this, with the average number of reported drivers sliding from 3,011 in 2015 all the way down to 2,703 in 2016. As such, it should come as no surprise that 88 percent of respondents again list driver-related costs—such as recruitment, retention, and training—as their number one challenge in 2016 (see Figure 1), a small drop from 92 percent in 2015. 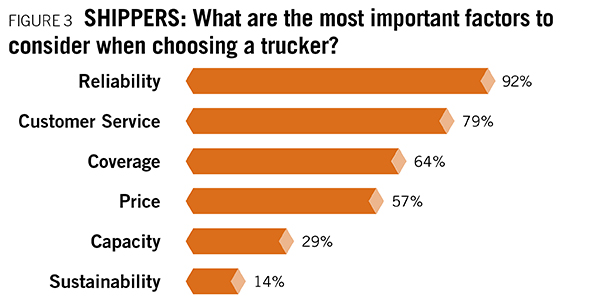 Regulations come in second behind driver-related costs, with 62 percent of carrier respondents citing regulations and compliance as a top challenge. The industry's frustration is understandable. Regulations aren't only challenging for trucking companies; they are also expensive. The more oppressive the regulation, the more it is likely to cost.

For example, Hours-of-Service (HOS) rules continue to be a hot topic of debate in 2016, as drivers are allowed fewer hours on the road in the midst of a massive driver shortage. Among carriers surveyed, 85 percent say that HOS had "somewhat of an impact" or a "marked impact" on their operation (see Figure 5). With the Federal Motor Carrier Safety Administration (FMCSA) unwilling to bend on safety measures such as Compliance, Safety, and Accountability and HOS, the trend toward more safety measures will likely continue.

The FMCSA has also proposed more stringent driver training, adding more expenses for carriers. Carriers have mostly shielded their shipper partners from the effects of HOS, however, with 79 percent of shippers reporting that HOS has had no impact on them to date (see Figure 5). 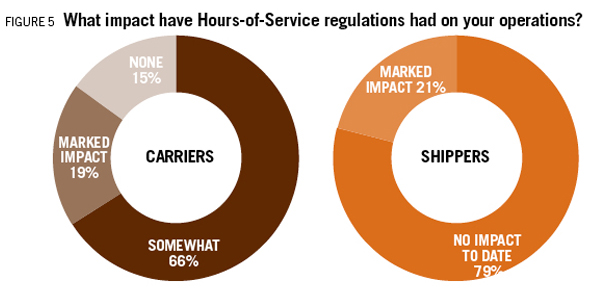 The Environmental Protection Agency (EPA) also hit the trucking industry with new carbon emissions standards in 2016, requiring big rigs to reduce carbon emissions by 25 percent over the next decade. This means new equipment—and another cost. Climate change is a serious issue, and as one of the largest contributors of harmful emissions, the trucking industry takes it seriously. Most larger carriers and fleets have embraced the new carbon standards, but owner-operators and smaller trucking firms fear that the additional expenses will leave them by the side of the highway. 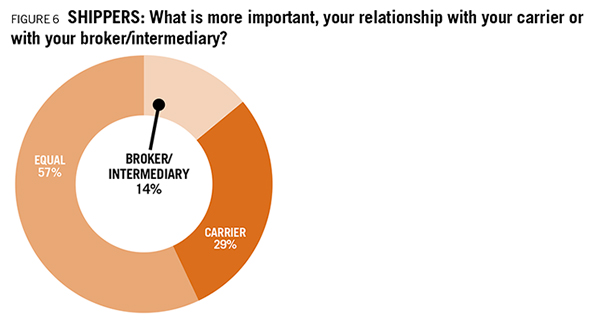 Regulators are pushing other technologies on truckers as well. The National Highway Traffic Safety Administration and the FMCSA want to implement speed-governing devices on all vehicles weighing more than 26,000 pounds, and the FMCSA's long-awaited Electronic Logging Device (ELD) mandate requires all commercial trucks to install the devices by Dec. 17, 2017.

Opponents to speed-limiting devices argue that regulating vehicle speed is in itself a safety issue, because limiting speeds on the interstate can lead to higher incidences of road rage and interrupt the general flow of traffic. Proponents say that limiting speed allows for engine designs that can more easily optimize fuel efficiency and cut carbon emissions.

ELDs are getting less pushback. More than 87 percent of survey respondents have already implemented ELDs into their fleets, and an additional 12 percent are looking into it. It seems safe to say that most carriers will meet the 2017 deadline well ahead of schedule.

Shippers don't appear to suffer the same regulatory hassles, with only 29 percent of shippers surveyed citing environmental, regulatory, and security compliance as a challenge (see Figure 1). They are likely insulated from the most intrusive parts of these regulations by their carriers and providers. Yet, 71 percent of shippers say they've experienced rate hikes beyond fuel surcharges (see Figure 2), so the costs are beginning to trickle through the supply chain beyond the carrier.

No matter how many rules and regulations are passed, hanging over it all is the current state of U.S. transportation infrastructure. Truckers are out there on the front lines of the infrastructure battle, and every pothole, substandard bridge, and washed out road affects them directly.

Despite a $305-billion bill to fund transportation in late 2015, the Highway Safety Fund remains starved and infrastructure nationwide continues to crumble. Poor highways cause additional wear and tear on commercial vehicles, reducing their longevity. With 38 percent of those surveyed citing rising equipment costs as a major challenge, many companies can't afford to replace equipment sooner than necessary. Fifty-seven percent of respondents name transportation infrastructure as the legislative measure that has the most impact on their business (see Figure 4).

While 2016 hasn't seen as many high-impact acquisitions on the scale of XPO's buyout of Con-way in 2015, that doesn't mean that brokers aren't still playing the game. Even with uncertainty in the industry, freight brokerage is still a safe bet. When capacity is tight, service providers secure space for shippers and ensure carriers aren't wasting miles by returning empty from deliveries.

This ability to play both sides has worked out well for freight brokers, as substantial investment capital has been thrown at the industry during the past several years. Many of the largest brokers offer huge service portfolios featuring the latest technology. They also maintain a tight hold on the market, keeping rates low, which makes them attractive to small and mid-sized shippers.

The jump in this number can be attributed to the additional capacity that is available in the marketplace over the past year. Instead of needing to turn to a broker all the time, shippers are finding capacity at the source as well. Moving forward in the face of uncertainty, shippers will still need to rely on both brokers and carriers to provide them with consistent capacity.

From Behind the Wheel

For the most part, this report covers issues at the strategic level. Not every truck belongs to a fleet, however, and executives aren't the only ones with opinions on the industry. What do truckers think about all of this? IL reached out to drivers on social media to get their take on current issues.

In addition to myriad new regulations, various proposals to raise fuel taxes as a means to fund infrastructure projects continue to bounce around state governments and Washington, D.C. Owner-operators fear being priced out of the market. While larger fleets can absorb higher fuel costs by spreading them over a large number of clients, a single truck or small fleet has a harder time eating a larger fuel bill.

Inbound Logistics, in collaboration with Truckstop.com, also surveyed a number of ground-level employees who work every day to keep the supply chain moving. Here are some of their responses regarding fuel taxes:

"Raising fuel taxes is not right. It's going to be hard to keep a company going when the loads aren't paying that well. If they raise the fuel taxes, a lot of small businesses will struggle to keep their business going," says one dispatcher.

"With the constant rate decreases in loads and increases in fees and operating costs, they are just weeding out the small businesses from being able to make it. This enables bigger companies to take over more business and haul for cheaper rates," a truck driver says.

"Fuel is the number one cost of doing business. An increase will drive myself and others like me out of business," says an owner-operator.

The general consensus among the drivers and ground-level employees surveyed by IL and Truckstop.com seems to be that the U.S. government, no matter what its intentions, has consistently failed to look out for the little guy. State governments consistently siphon off gas tax money for non-transportation projects, and the federal government follows suit by failing to properly invest in initiatives such as the Highway Trust Fund. In the meantime, small business owners struggle to stay afloat as further taxes and fees are levied at them to cover increased costs.

"Instead of raising the fuel taxes, why not use the fuel taxes they get now for their intended purpose?" asks one truck driver. "Fuel taxes are supposed to be for upkeep on the highways. Instead, we use them for everything else. Soon, truckers will be working for free."

IL editors selected this year's list from a pool of 200-plus trucking companies, evaluating surveys, conducting online research, and talking with shippers and truckers alike. This guide serves as a benchmark for the types of services transportation buyers value when looking for new partners or evaluating current ones.

The Top 100 list offers a snapshot of the trucking segment, including large truckload and LTL carriers with global inroads and niche-specific regional haulers that get their white gloves dirty delivering to the final mile.

Together, Trucking Perspectives and the Top 100 Truckers directory provide a comprehensive guide to help you find partners that will put your company in the driver's seat.

First,ILsolicited more than 200 trucking companies to complete a questionnaire that documents their assets, service capabilities, operational scope, and areas of expertise. We also asked carriers to comment on challenges and opportunities in today's market.

Second,Inbound Logisticsreached out to freight shippers to comment on industry trends, regulatory challenges, and their partnerships with carriers.

The U.S. trucking industry is the lifeblood of domestic supply chains—the first and last mile for both producers and consumers. This snapshot, based on our Trucking Perspectives survey results, offers an in-depth profile of the assets, services, and expertise that carriers bring to the market.