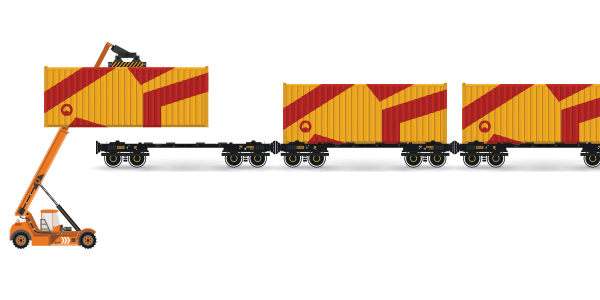 Experts share advice on how to get fast-enough service while saving money with domestic intermodal transportation.

North American shippers in 2019 aren't choosing intermodal for domestic transportation quite as often as they did in 2018, according to statistics from the Intermodal Association of North America (IANA). In the first quarter of 2019, domestic container traffic fell by 4.1% compared with Q1 of 2018. That trend continued in the second quarter, which saw a year-to-year drop of 6.3%.

Nevertheless, many shippers still look to intermodal for transportation savings. "Rail is always cheaper than road," says Murray Tairney, purchasing manager at Davey Textile Solutions, which uses intermodal for some shipments from a supplier in Montreal to its factory in Edmonton, Alberta.

"If I could ship every case intermodal, I would," says Robert Iannuzzo, senior manager of logistics at importer and distributor Proximo Spirits in Jersey City, New Jersey.

Of course, when your logistics strategy includes rail freight, different conditions apply than when you use only over-the-road (OTR) transportation. Here's some advice for making the most of rail intermodal.

When to Use It

1. Choose the right lanes. "Generally, longer-mile transit equates better to going on the rail than shorter-mile transit," says Craig Laughlin, senior business development representative at Zipline Logistics in Columbus, Ohio. A trip of 500 or 600 miles by rail doesn't save the shipper enough to offset the cost of drayage to and from rail terminals.

A shipment of 700 miles or more is an opportunity to consider intermodal, says Rick LaGore, chief executive officer at Intek Freight and Logistics in Indianapolis. "Also, you don't want to be more than 50 or 100 miles away from the rail ramp." That distance can be a bit greater if the rail portion of the trip is extremely long.

2. Choose the right loads. "Rail transit is comparatively more complex and less predictable than over-the-road," says Matthew Decker, vice president of intermodal at Chicago-based Coyote Logistics. "If you have an inflexible, pre-set delivery appointment with hefty potential late fees, check with your provider to decide if recent rail performance is consistent enough to meet your needs."

Loads that lend themselves well to intermodal transportation include raw production materials, packaging materials, and goods being transferred from one warehouse to another. "These are moves that are necessary but that aren't ending in a sale," says Laughlin. Because they can afford a bit of extra transit time, such moves provide great opportunities to reduce transportation costs.

3. Don't be in a hurry. While rail freight services are cheaper than truck transportation, they're also slower. "If you're desperate for a shipment, never use rail," says Tairney. "But if you can wait and build in that lead time—whether that be one week or two weeks—and you're not desperate, rail's a great way to travel."

4. Find a partner who offers creative solutions. "It boils down to working closely with a multimodal third-party logistics (3PL) provider," Cooper says. "For example, there may be ways to leverage short-haul truck moves as a cost-saver in an intermodal strategy. To do this, the 3PL needs insight into the shipper's entire book of truckload business."

5. Examine all intermodal options. A third-party partner that maintains relationships with all rail carriers can offer a choice of routes, transit times, and rates for a particular load. "Some shippers would rather wait the extra two days and save money," says Laughlin. Others want faster transit, even though they know it won't be as fast as an OTR haul.

The carrier generally dictates the route that rail freight takes. But the shipper may be able to choose between tendering the cargo to a railroad nearby or draying it over a long distance. "Sometimes there's flexibility in choosing which ramp to use for lanes like Chicago to Los Angeles, where multiple terminals offer different routes and cutoff times," notes Troy Cooper, president of XPO Logistics in Greenwich, Connecticut.

6. Consider splitting your business. You might need to work with more than one partner to get the greatest advantage. For example, in the western United States, some intermodal marketing companies (IMCs) work primarily with the Union Pacific (UP) railroad, which provides its own domestic containers and won't take containers from other sources. Other IMCs work mainly with the BNSF Railway and provide their own rail containers.

"Shippers need to be educated on the options," says Matt Parry, senior vice president of logistics at Werner Enterprises in Omaha, Nebraska. "Most of the time that means bringing in a few different providers that ride each railroad and using that as a way to learn the right choice for you."

7. Plan ahead. "Lead time is always huge," says Laughlin. Large shippers can use their volume to negotiate better rates from carriers. But even smaller shippers can keep a lid on intermodal costs by planning shipments well ahead of time and making sure that every step occurs on schedule.

"Detention is higher for rail than for truck," says Laughlin, referring to the charge a carrier imposes when rail freight sits in a yard too long. So, for example, when a container reaches a destination ramp, it pays to make sure that a truck will arrive promptly to dray it to the final destination.

8. Be flexible. Strict rules about when a truck should arrive to pick up or deliver a container can push costs higher. In some cases, if you agree to admit a driver a little sooner or later than usual, you can save money. "Sometimes it's cheaper to pay overtime at the warehouse to unload the container a day or two earlier than to have it sit in the yard and pay storage," says Laughlin.

9. Align shipping patterns with rail schedules. A company might send a truck to meet a train that arrives at 4 a.m., and by the time that container is loaded on a chassis and ready to roll, it's 6 a.m. But the consignee only accepts deliveries between 4 and 7 a.m.

"That adds a whole day to the transit, and incurs dwell [detention charges]," says Parry. Unless the consignee can change its receiving hours, or the shipper can work with a rail carrier that arrives earlier, intermodal might not be the right choice for this lane.

10. Check the calendar when you ask for rates. "The fourth quarter is typically the worst time to go out for bid," says LaGore. Carriers set prices for lanes based on current market conditions. Demand for capacity surges toward the end of the year. So if you approach carriers in November, they're likely to ask for more money.

"It makes better sense to go out in February or early March to get the best rates," LaGore says. "That tends to be when intermodal volumes are down." Big shippers follow that rule of thumb; smaller shippers should do it, too.

11. Mix intermodal and OTR strategically. "Intermodal doesn't need to be all-or-nothing," says LaGore. To get the best price and service, examine each lane that's at least 700 miles or more, evaluate the distance to rail ramps, and then compare prices for intermodal and truckload service.

Even a shipper that uses truckload transportation successfully on a high-volume lane should consider blending modes as a hedge against capacity crunches.

12. But mix them consistently. Whatever blend of truck and rail freight you choose, it's important to execute consistently on that strategy. "You just add cost if it's intermodal on Monday and truck on Tuesday, because both create inefficiencies in the network by never knowing when you're going to ship," says Parry.

IMCs and other service partners provide the best value when there's a reliable rhythm to the service a customer expects, he says.

14. Watch your weight and dimensions. “The standard over-the-road weight is 45,000 pounds,” says LaGore. “On intermodal, you can only load at 42,500 pounds. That often disqualifies potential loads.”

Also, a domestic intermodal container may have slightly different dimensions than a truck trailer. “Weight and size differences do have an effect on some products,” says Parry. Some shippers decline to use rail because they can’t get as much product into a container as they can into a trailer.

15. Block and brace correctly. “While intermodal transit is smooth, gentle vibrations caused over hundreds of rail miles can cause product to slide,” says Decker. “To prevent load shifts and product damage, shippers must fill empty space with void fillers and dunnage.” This is true for OTR as well, but it’s more critical with intermodal.

Besides causing damage, vibrations on the rail might also change weight distribution. When the container returns to the road at the end of the trip, it might no longer comply with state regulations for how much weight a truck may carry on each axle.

16. Use a drop-and-hook strategy. Dropping containers on site for loading later is one of the keys to efficiency at Proximo Spirits’ distribution center (DC) in Lawrenceburg, Indiana. That facility ships 12 to 14 million cases annually from eight loading bays.

“The only way I can do that is to smooth out the logistical side of the business by pre-loading,” says Iannuzzo. The DC usually has 75 to 100 empty containers waiting on site. “That gives me the flexibility to load then, when I have the staff and inventory, versus having them wait for three to six hours with live loads or trucks.”

With a drop-and-hook strategy, drayage drivers may also drop loaded trailers at a receiving site, rather than wait for them to be unloaded. A facility that accommodates drivers’ schedules can save a shipper money. “Keep drop-and-hook sites open around the clock with no appointment necessary,” says Cooper.

17. Cultivate close ties with rail carriers. "We've developed some good relationships with Norfolk Southern and CSX out of Cincinnati," says Iannuzzo, whose company works with Werner Enterprises to coordinate most of its transportation. "Those railroads tend to do things for us they might not do for other customers."

Good forecasts and abundant communication are key to fruitful relationships. "The more, and the more timely, information I can get to them, the better," he says.

Benefits that Proximo has seen grow out of those strong ties include a decision by CSX to keep its rail ramp in Cincinnati open on weekends to accommodate Proximo's heavy volume there, Iannuzzo says.

18. Take advantage of technology. The transportation management system (TMS) that your IMC or 3PL uses should be able to look across multiple modes to find the best solution. "Ask about electronic communications," says Cooper. "Are the updates current?" Are shipment tracked on both containers and trucks?"

19. Try, try again. Don't let one bad experience—say, an unexpected detention charge—sour you on intermodal. "There's a place for it," Laughlin advises.

For example, consider the customer that used intermodal for seven out of 100 recent moves with Zipline Logistics. "Those moves will save the company about $5,000," he says. "Compound that over months, quarters, and years, and it's a sum of money you can't ignore."