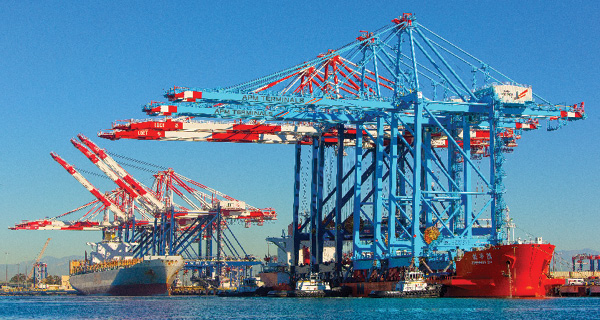 From Atlantic to Pacific, these ports know how to get their green on.

As environmental sustainability continues to be a hot topic for today's shippers and transportation service providers, U.S. ports have implemented a wide variety of green initiatives. While they have completed some of these initiatives in a matter of months, others have taken years, and even decades to achieve. Whether ports are reducing ship waiting times, decreasing fuel consumption, or modernizing fleets, their primary goal is clear: To significantly diminish emissions that are potentially detrimental to the health of the environment, employees, and residents who live nearby.

On the next few pages, Inbound Logistics identifies the 10 greenest ports in the United States, based on their wide-ranging (and, at times, novel) approaches to reducing emissions such as greenhouse gases, carbon monoxide, and fine particulate matter. The ports differ in location and size, yet they share a commonality—they have undertaken various initiatives to ensure the ultimate impact of sustainability outweighs its costs.

Inbound Logistics selected each of these ports according to the variety—and long-term effect—of their green initiatives, as measured by emissions reduction, air and water quality improvements, and other green ingenuities.

In recent years, the Georgia Ports Authority (GPA), which currently oversees the Ports of Brunswick and Savannah, has announced a variety of initiatives that share one central purpose—emissions reduction. Among those initiatives, the GPA has begun to transition its rubber-tired gantry cranes (RTGs) from diesel to electric power. Because the electric RTGs only use diesel power when they move between container rows, they operate on electric power more than 90 percent of the time.

The GPA has also installed 104 electrified refrigerated container racks. Because they do not require the use of diesel generators, the racks currently save 5.6 million gallons of fuel annually. In addition, the GPA uses electrified ship-to-shore cranes, which capture energy—enough to power themselves for 18 minutes of each operating hour—as they lower container boxes.

Continuing its commitment to environmental stewardship, the Port of Baltimore currently offers a Dray Truck Replacement Program that allows truck owners and operators to trade in their old model trucks for newer models that reduce air emissions. Since the port enacted the program in 2012, nearly 135 trucks have been replaced. As a result, emissions have steadily declined, as truck turn times were reduced by 6.6 percent in 2014 alone.

In addition, the port strives to improve the water quality and energy conservation of its facilities. For example, it installed a variety of vaults that treat stormwater, and upgraded its lighting and mounted solar panels on a cruise terminal and transit shed. These projects not only increased environmental sustainability, but also improved the productivity of port operations.

In 2005, to decrease the Port of Long Beach's ecological footprint long term, the Long Beach Board of Harbor Commissioners ratified an investment in cleaner air, soil, and harbor water, known officially as the Green Port Policy. Adhering to this policy, the port seeks to improve its air quality through various initiatives of the San Pedro Bay Ports Clean Air Action Plan. Enacted in 2006, the plan is being updated for a second time, as the port seeks new strategies to reduce emissions.

In 2015, the Port of Long Beach constructed four new buildings on a recently redeveloped marine terminal located at the 170-acre Middle Harbor. The buildings, which conserve energy and water, have received a gold level certification from the Leadership in Energy and Environmental Design (LEED). Of equal importance, the terminal itself is also environmentally friendly. Its cranes and cargo moves run on electricity, resulting in nearly zero emissions compared to traditional terminals.

In 2004, the Port of Los Angeles pioneered a process that captures emissions as ships plug into shore power—while they're at berth. Shortly after implementation, the process, known as the Alternative Maritime Power program, resulted in the decline of 14 tons of diesel particulate matter, as well as 123 tons of nitrogen oxide emissions. Buoyed by this early success, on Jan. 1, 2014, the State of California established a new regulation that requires container and refrigerated ship fleets to plug into shore-side power.

With nearly 19 miles of waterfront on the San Francisco Bay, the Port of Oakland is committed to protecting its surrounding wildlife from the transmission of harmful pollutants. To help diminish air pollution from mobile and stationary on-, near-, and off-shore areas, the port has created a Maritime Air Quality Improvement Plan (MAQIP). Among other goals, the plan's key objective is to reduce diesel particulate matter emissions by 85 percent by 2020, when compared to 2005 levels.

In response, the port's maritime area offers shore power to ships so they can plug into electric grids while they are docked. Through an electric grid connection, the docked vessels help the port achieve another sustainability goal: the State of California Air Resources Board's requirement to reduce the aggregate of air pollutants emitted from ships by 80 percent by 2020.

With a goal to reduce greenhouse gases by 15 percent by 2020 in comparison to 1990 levels, and diesel particulate matter by 75 percent by 2020 when compared to 2000 levels, the Port of Portland has implemented an array of sustainability initiatives. In 2012, the port began to replace the Oregon's (a dredge that it owns and operates) 1960s-era engine with a modern, more efficient engine; it completed the project in 2013. Since then, the vessel's diesel particulate emissions have declined by 88 percent.

The Port of Portland has also purchased certified Renewable Energy Credits for 100 percent of its electricity consumption, and invested in new energy-efficient LED lighting for its maintenance facilities, marine terminals, and roadways, along with the Portland International Airport's parking lots. It will complete the two-year project in 2017.

In addition, the Port of Portland installed 35 acres of porous pavement at one of its terminals. Aside from increasing vehicle storage space, the pavement also infiltrates 100 percent of stormwater into the site's subsurface to naturally break down pollutants.

In 2013, the Port of San Diego's Board of Port Commissions created a seven-year and 22-year Climate Action Guide. With a focus on long-term environmental sustainability, the port established two main objectives—to reduce greenhouse gases by 10 percent by 2020 and 25 percent by 2035, using 2006 statistics as a reference point. To achieve these goals, the board also outlined six emission reduction strategies, including water and energy conservation.

Although the port has reduced water usage by 47 percent since 2008, it will continue to implement new tactics for further conservation, including discontinuing repetitive power washing and decreasing irrigation. The port has also installed 10 public electric vehicle-charging stations around port tidelands, so that vessels can receive shore power and plug into electric grids while they are docked.

Committed to the safety of its employees, nearby residents, and environment, the South Carolina Port Authority (SCPA), which operates terminals in Charleston, Georgetown, and Greer, has introduced various sustainability initiatives in recent years. For example, to reduce emissions, the SCPA has replaced traditional diesel conveyors with electrified ones, and upgraded its terminal equipment, including fully electrified ship-to-shore and rubber-tired gantry cranes.

In March 2016, the SCPA publicized plans to install solar panels on the warehouse rooftops of two of its terminals, resulting in the generation of 3.7 megawatts of electricity. Furthermore, the SCPA has dedicated $5 million to the conservation of the Cooper River Corridor's Francis Marion National Forest, in Huger, S.C.

To unify the management of their marine cargo terminals and achieve their goals of emission reduction more efficiently, the ports of Seattle and Tacoma formed a partnership known as The Northwest Seaport Alliance. The alliance is committed to ensuring sustainable growth that will not only protect the environment, but also the public health of each port's surrounding communities.

Prior to this alliance, the two ports had already joined forces in 2008, collaborating with Port Metro Vancouver, British Columbia, to develop a variety of short- and long-term emission reduction goals, via a policy known as the Northwest Ports Clean Air Strategy. Among other key goals, the strategy, which was updated in 2013, is particularly focused on reducing two emissions by 2020: Diesel particulate matter emissions per ton of cargo by 80 percent and greenhouse gas emissions per ton of cargo by 15 percent.

The Port Authority of New York and New Jersey has undertaken a variety of initiatives to improve air, land, and water quality. For example, since 2001, the Port Authority acquired nearly 400 acres of property within the Hudson-Raritan Estuary to preserve open space for conservation and ecological development.

The Port Authority has also introduced a Clean Air Strategy, a set of voluntary actions that will reduce emissions through initiatives such as installing shore power capability at the Brooklyn Cruise Terminal, modernizing cargo handling equipment, and replacing old trucks. In doing so, the Port Authority is committed to annually decreasing criteria air pollutants and greenhouse gases by 3 and 5 percent, respectively, resulting in an eventual 80-percent decline in greenhouse gases by 2050.