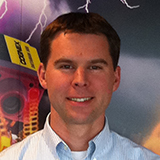 The recent increase in the number of consolidation warehouses operated by e-commerce companies that receive orders from many different suppliers in relatively small quantities creates challenges from an ID reading perspective.

The small size of their typical order means that consolidation warehouses usually do not have the leverage over their suppliers that would enable them to enforce a requirement for labeling consistency.

So the packages typically arrive in many sizes and shapes with labels in many sizes and styles that may be affixed in different sides of the package, in different locations, and different orientations. It’s important that these labels be scanned with very high read rates because each read failure typically requires manual handling and the high volume of packages means that even a fairly high read rate can generate considerable manual handling expenses.

For example, assume that a high-volume distribution center handles 126,760 packages per day and that each no-read requires only 1.5 minutes of work on the part of an operator making $15 per hour. Then even a 99 percent read rate will generate 1,268 no-reads per day or 443,800 per year (assuming that the warehouse is open 350 days per year) for an annual rework cost of approximately $166,425.

In the typical consolidation warehouse, this challenge is addressed with a scanning tunnel at every dock door. Each scanning tunnel typically consists of an array of six code readers configured to read the top, bottom, two sides, front, and back of each package as it slides down a conveyor. This approach eliminates the need for the operators that unload the trucks to position each package in exactly the right orientation for it to read by a single scanner.

But scanning tunnels by themselves do not resolve the issue of codes that are difficult to read because they are small, positioned at odd angles, or degraded. Another challenge is that reading the front and back of the box as it moves down the conveyor requires a scanner that is positioned at an odd angle to the package, a situation where perspective distortion further increases scanning difficulty.

The ID readers market has been dominated by laser scanners that are simple, inexpensive, and easy to use. But laser scanners see only a single scan line at a time so they have difficulty reading codes in a degraded condition, at varying angles, and in different positions. Laser scanners typically have read rates of 2 to 5 percent in tunnel scanning applications, resulting in high manual handling costs.

Some warehouses have addressed this challenge by using image-based line scanners that acquire a complete image of the side of the package one line at a time. Once the image is acquired, the scanner uses sophisticated software algorithms to decode the label, normally providing read rates far above laser scanners. The limitation of line scan image readers is that they are quite expensive, involving a large capital investment for a consolidation warehouse with 10 or more docks that would require five or six readers for each dock.

Another limitation of line scanners is that they require constant velocity motion. So if, for example, the package bumps the side of the conveyor, the barcode is likely to be unreadable. On the other hand, line scan readers offer the highest possible level of resolution so they are well suited for specialized tasks, such as reading handwritten or typewritten text on a label, which are typically required in only one or a few locations.

A third type of ID reader used in tunnel scanning, image-based area scanners, fit somewhere in the middle between laser scanners and line scanners. Area scanners differ from line scanners in that they capture an image of the complete field of view instantaneously. Area scanners also use sophisticated algorithms to process the image, which in most cases makes it possible to read labels of any size or orientation or in a degraded condition. A key advantage of area scanners is that their cost is a fraction of that of line scanners so they are much better suited to applications like tunnel scanning that require large numbers of scanners.

Recently new algorithms have been introduced for area scanners that are 20 times faster than traditional methodologies. The increase in speed provides more time for decoding, which in turn makes it possible to read barcodes that are highly damaged. The end result in typical applications is read rates of 99.9 percent, which can reduce handling costs by 90 percent in the example mentioned above to only $16,689.